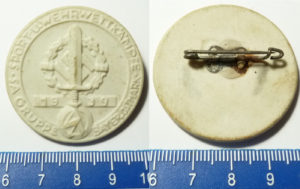 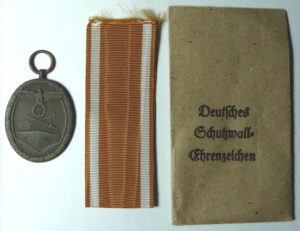 A nice example of this scarce badge, here made of stamped, pot metal.  Extremely Fine or better, with no bends or warping, with just a tinge of pesting on the right side of the back.  The original pinback is still present and attached.  The color is a rich, deep gray.  59.5 mm tall x 42 mm wide.

From Wikipedia:
The Panzer Badge (German: Panzerkampfabzeichen) was a World War II military decoration of Nazi Germany awarded to troops in armored divisions. Before 1 June 1940 it was known as the Panzerkampfwagenabzeichen.  Introduced on 20 December 1939, the Panzer Badge was authorized for award to tank crews who had actively participated in three armored assaults on different days.  The authorization of these badges was usually done at regimental or divisional level.”

Panzer Badges have been widely counterfeited, but the fakes are generally cruder than the originals or are obviously cast.  The badge offered here is guaranteed to be authentic. 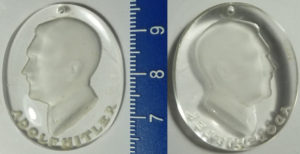