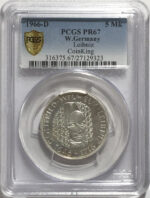 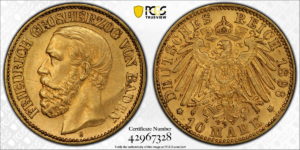 West Germany 1966-D 5 Mark, Leibniz, PCGS PR67. From the 2013 exhibition of the CoinKing collection. At the time, this was one of the finest examples known. Since then, the populations have swelled, but this is still an outstanding example of the type.

From Wikipedia:
Gottfried Wilhelm (von) Leibniz[b] (1 July 1646 [O.S. 21 June] – 14 November 1716) was a German polymath active as a mathematician, philosopher, scientist and diplomat. He is one of the most prominent figures in both the history of philosophy and the history of mathematics. He wrote works on philosophy, theology, ethics, politics, law, history and philology. Leibniz also made major contributions to physics and technology, and anticipated notions that surfaced much later in probability theory, biology, medicine, geology, psychology, linguistics and computer science. In addition, he contributed to the field of library science: while serving as overseer of the Wolfenbüttel library in Germany, he devised a cataloging system that would have served as a guide for many of Europe’s largest libraries. Leibniz’s contributions to this vast array of subjects were scattered in various learned journals, in tens of thousands of letters and in unpublished manuscripts. He wrote in several languages, primarily in Latin, French and German, but also in English, Italian and Dutch.